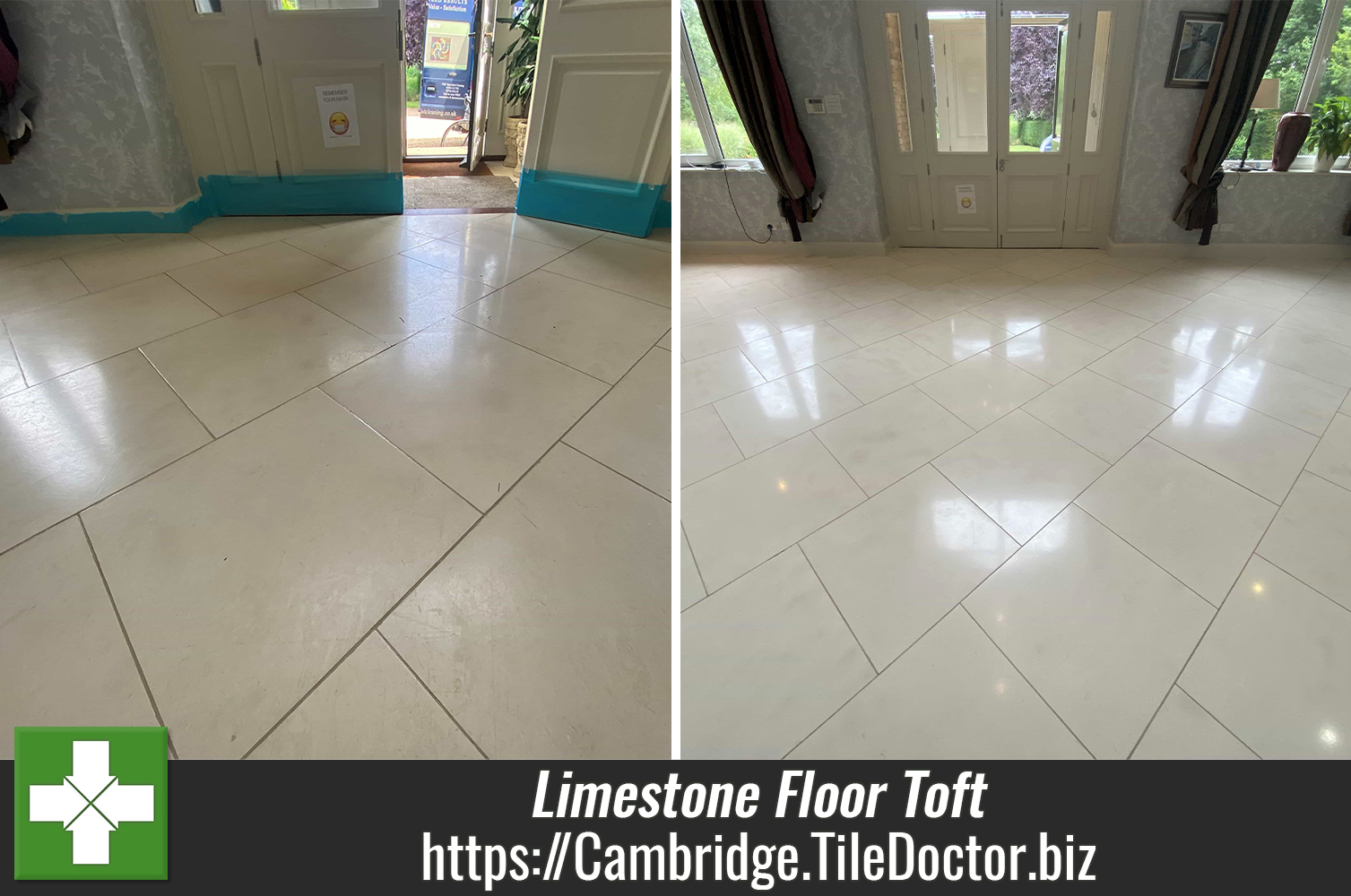 This job was for a repeat client in Toft near Cambridge who had aa stunning large hallway that was tiled in beautiful pale Limestone. My client had asked me back to work on the floor having previously completed the deep clean and seal of a Terracotta floor previously. 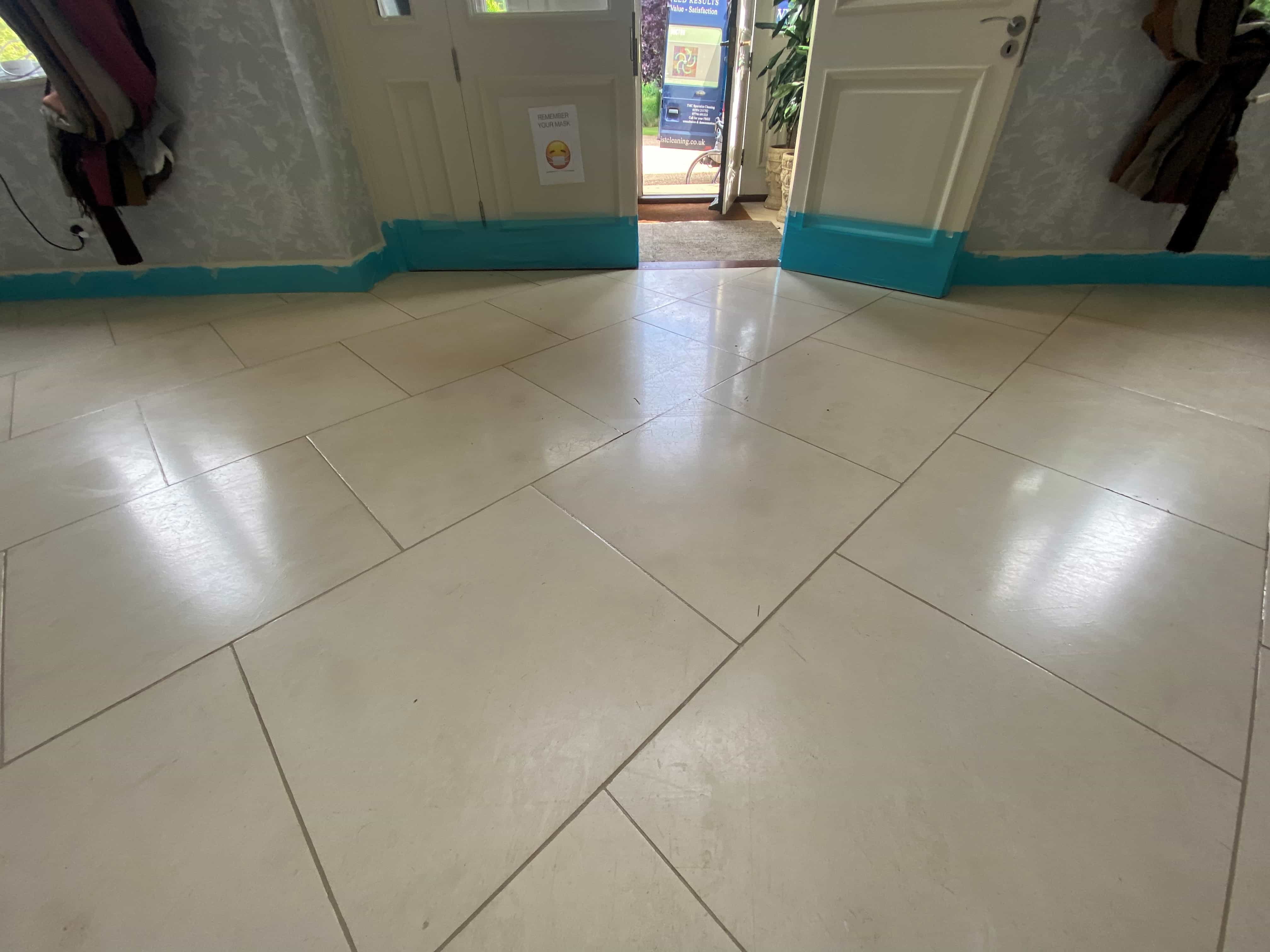 The Limestone tiling in the entrance hall had years of some type of topical sealer applied to it. This caused the stone to look slightly discoloured and from certain lights showed up hundreds of scratches and smudges embedded in the seal. I’ve tried to capture this problem in the photographs on this page, but it was very difficult.

A topical sealer sits on the surface of the tile where it is vulnerable to scratching, hallways are generally high traffic areas and so more likely to see this sort of problem. Ideally an impregnating sealer should have been applied, impregnators work by occupying the pores in the stone thus preventing soiling from becoming ingrained in the stone.

Before starting we protected the woodwork against splashing with blue film, I don’t usually make a great deal of mess, but you can never be too careful when working in someone’s property especially one as beautiful as this.

To strip off the old sealer I began by applying a strong dilution of Tile Doctor Remove and Go to the Limestone tiles. I split the floor into sections and used a 400-grit diamond burnishing pad to work the Tile Doctor Remove and Go into the tiles. The floor was then rinsed off using our high-pressure cleaning system that applies pressurised hot water to the floor whilst simultaneously extracting the soil with its built-in vacuum. The system is quite heavy, so it is built into my van, and I run a large flexible hose to a spinner tool that does the cleaning. It is an expensive tool, but it saves a lot of time and leaves the floor fairly dry afterwards.

The 400-grit pad had released a lot of the sealer but there were quite a few layers to get through, so I changed the burnishing pad to a coarse 200-grit pad and repeated the process. After another rinse and extract I would see it had the desired effect and I was able to carry on building up the finish on the Limestone by apply the 400-grit followed by the 800, 1500 grit pads. It was a large floor and so this took up much of the day so once complete I left for the day so it could dry off overnight.

The next day I finished the polishing process with the application of a 3000-grit burnishing pad which is applied with a little water sprayed onto the tile and really brings up the polish on the stone. This process has the added advantage of leaving the floor dry so not long afterwards I was able to move on to sealing.

For this floor two coats of Tile Doctor Ultra-Seal were applied, it is an impregnating sealer that won’t alter the colour of the tiles leaving a natural look. 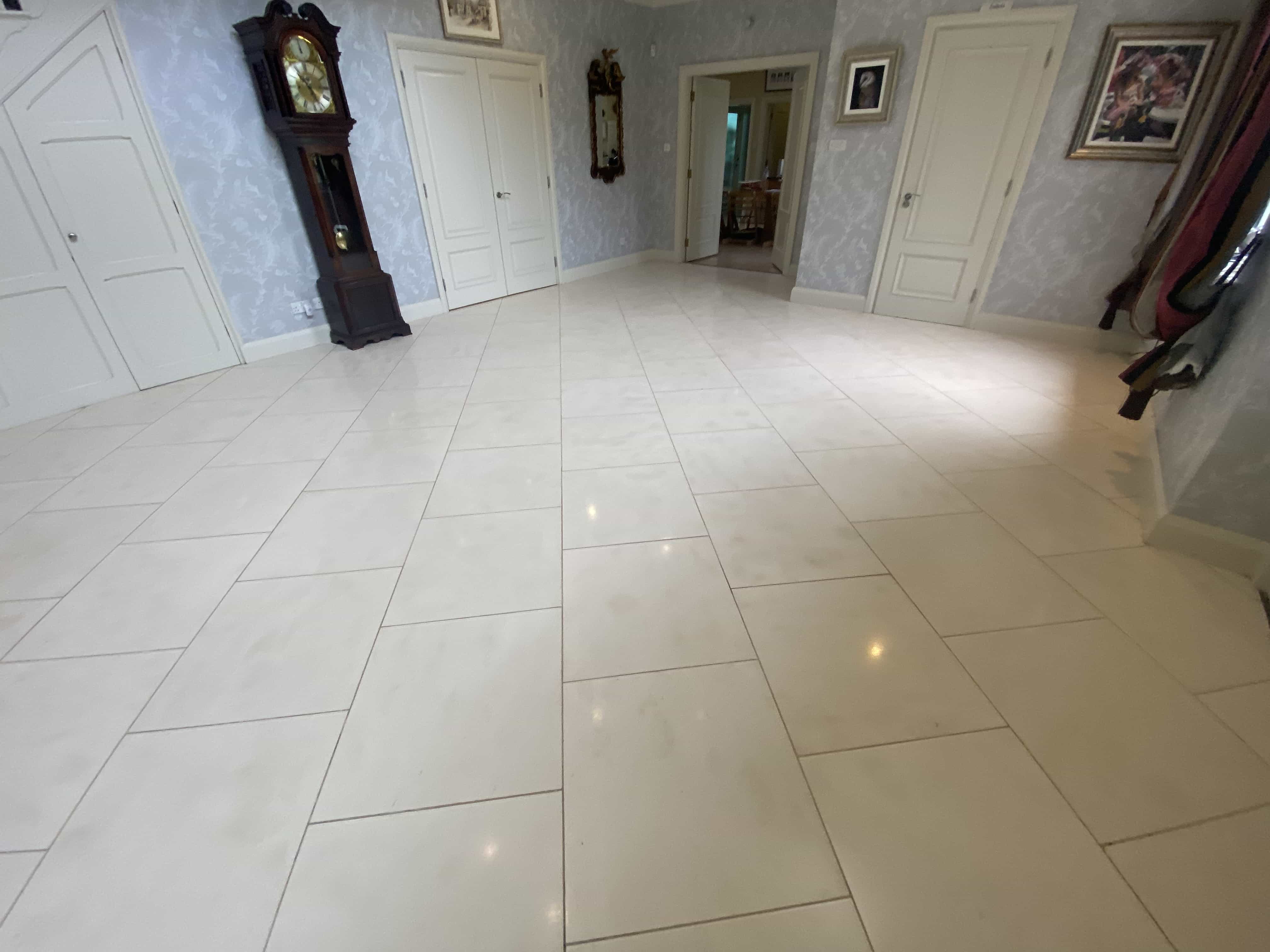 My client was much happier with the new finish and has asked for another quotation on some more Terracotta flooring that needs attention. For aftercare I recommend using Tile Doctor stone soap, it’s a special formula that builds on the patina which will help maintain the polished appearance of the Limestone.

Professional Restoration of a Limestone Tiled Hallway in Cambridgeshire 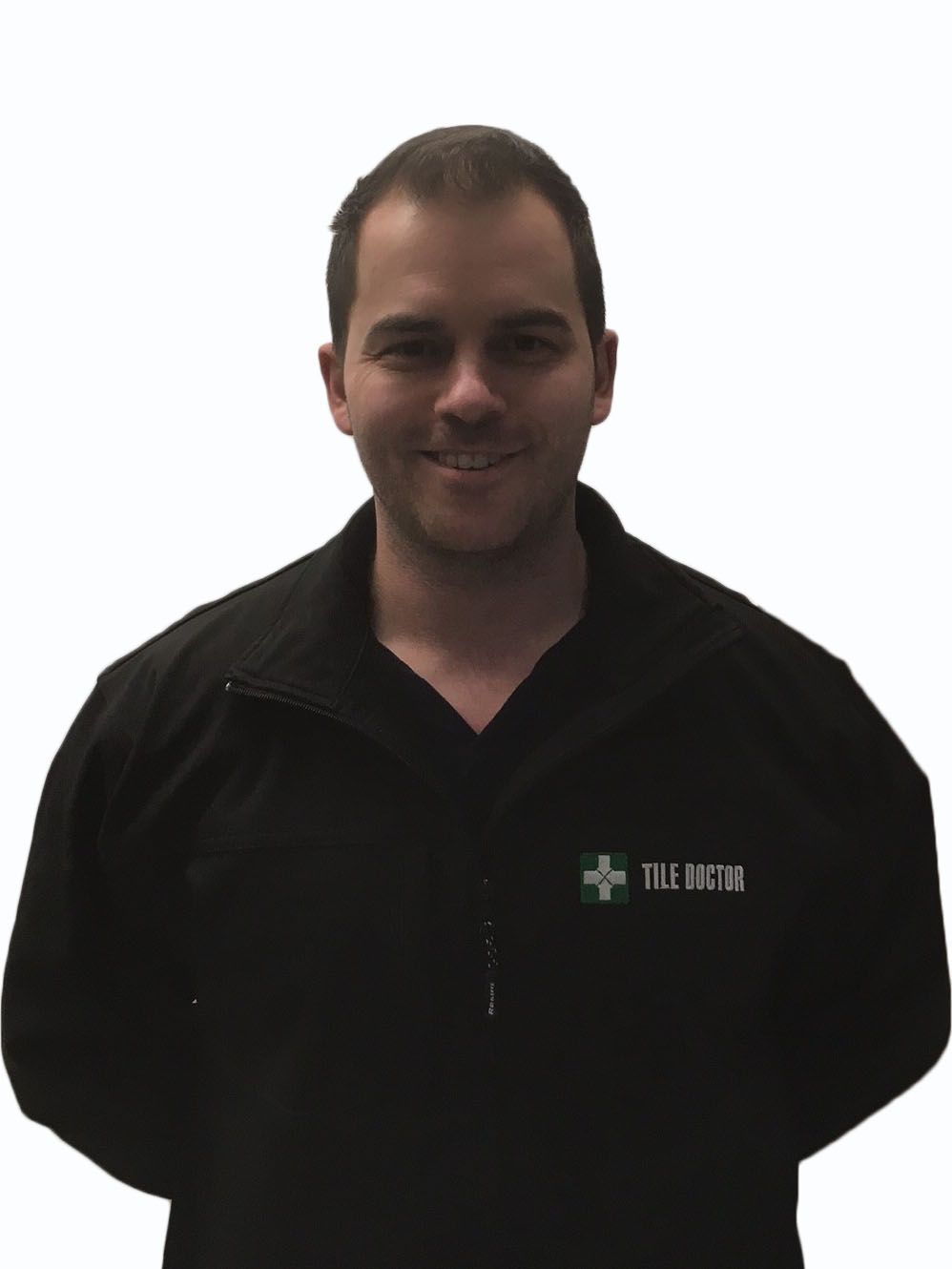 Tom was a very personable young man. Our floor was old quarry tiles which were not as straightforward to clean, due to a previous attempt at cleaning by another company. Tom was conscientious is his approach. . . to a difficult mammoth task. He made sure that we were completely happy with the end result. Well done Tom!
Jean T, Pertenhall

Tom always replied quickly to emails. He followed Covid measures well, and even quoted us ‘virtually’ using photos, then turned up on time and put protective sheeting down while working in our bathroom. He ta ked me through the process and what to expect the outcome should be. He asked before doing extra things. The end result was our bathroom, which has fully tiled walls, now looks like new. He cleaned the tiles and grouting, redid some grouting where needed, new sealant etc – really pleased with the end result. Polite and tidy too. Would definitely recommend.
Nikki K, Histon

Good, friendly professional service. Replaced a broken kitchen floor tile, and is returning in a few weeks when our new kitchen has been installed. Would recommend Tom to friends and family.
Mrs C, Wisbech

Fantastic results! Tom managed to recover a very damaged marble table and gave great advice on how to care for it in the future. I would definitely recommend.
Rachel M, Cambridge

Tom was polite and professional in the way he carried out the cleaning and polishing of my Mexican tiles in the kitchen, dining room and lobby. I would certainly recommend him. I am very pleased with the result.
Sonia G, Wicken

A painter had made a mess of our patio, and I contracted Tom to clean it up. The price was realistic given the job and Tom went above and beyond to do the best job possible. Very pleased with the result.
David M, Ely

Our job (replacing some kitchen tiles, cleaning and sealing the entire floor) turned out to be more challenging than expected. Tom worked hard to fix the problems and kept us fully informed throughout the process. He was always on time and very professional. Would be happy to recommend.
Eleanor G, Cambridge